So you want to write some shitty DSP code (or build a goofy sequencer or wonky LFO) and get it deployed into your Eurorack system? Me too! What are our options? Well I’m just a noob surveying the landscape but let’s take a look: 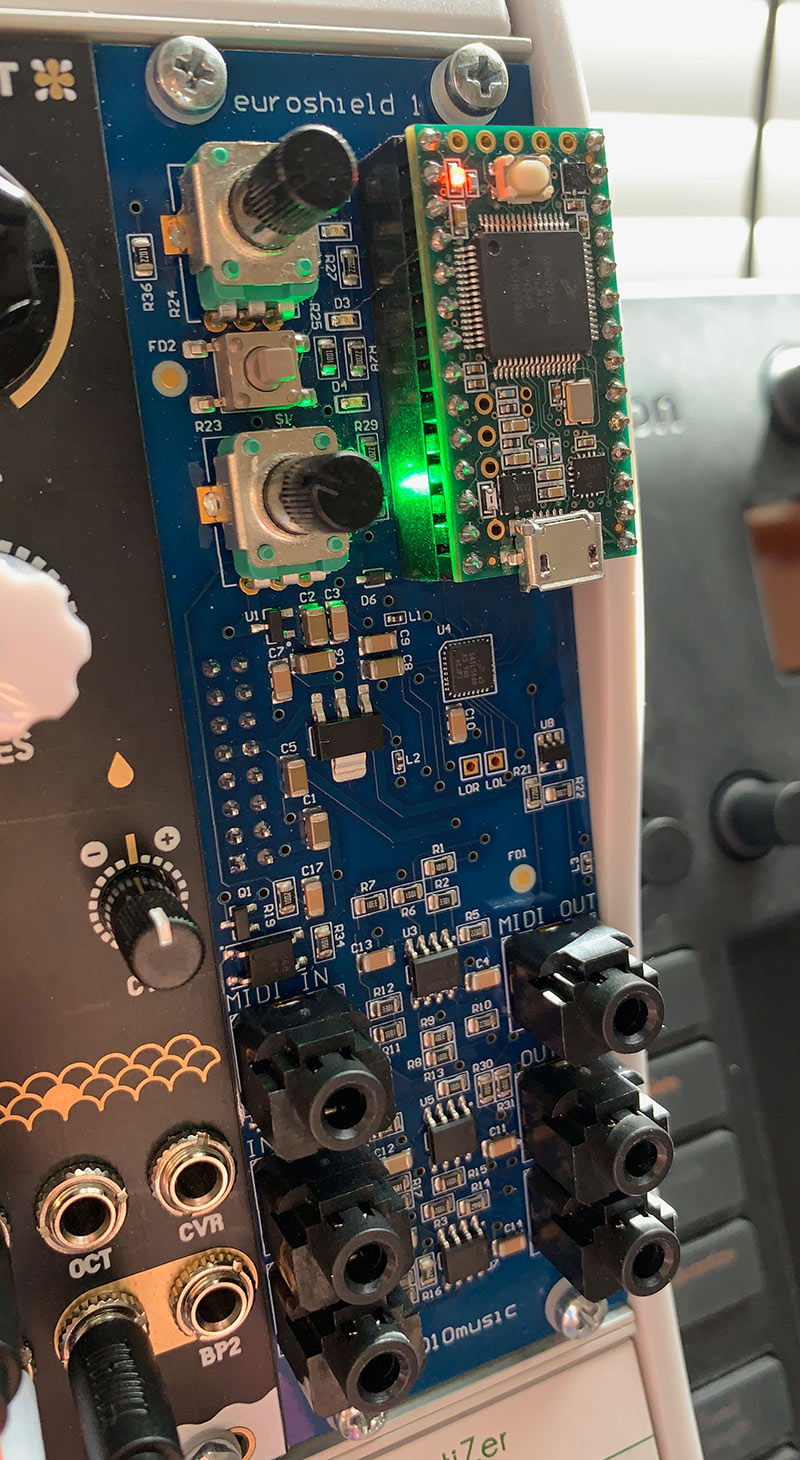 1010 Music offers this 8hp Eurorack interface for the Teensy Arduino chip. It has MIDI in/out, 2 inputs (CV or audio) and 2 outputs (CV or audio). 1010 Recommends using the Teensy 3.2 chip, but it’s compatible with up to 3.6 (which offers more memory and seems to be the best option). This product is a couple of years old now--there’s a user forum where some people are sharing code but it’s not very active.

Detroit Underground funded this Arduino shield via Kickstarter and it’s currently available (at a discount) from Perfect Circuit. I’ve seen a few cheap ones popping up on Reverb as well. It comes with some Arduino sketches that look like pretty cool (and seem to have fun UIs that take advantage of that display). It’s worth noting that all of the sketches are just CV/Gate I/O, no actual audio processing. There is a DSP library file with a filter implementation, so it seems like you could run audio in and process it, but some examples here would be really helpful.

While not explicitly targeting coders, the open source Ornament & Crime module has firmware (and alternative firmware) with lots of modules that look like a great start for hacking. Like Euroshield, o&c runs on a Teensy so there’s presumably a lot of code out there to leverage.

Total cost: $180-$220 (lots of different incarnations, check Reverb)
Pros: Good I/O, screen, lots of existing code to hack, plenty of useful modules for when you inevitably get bored of writing shitty DSP
Cons: Not much of a development community

MI’s open source modules have spawned an ecosystem of independent builders and alternative firmware that are thriving long after the official production of modules like Clouds and Braids have ended. Émilie Gillet’s contributions to the community can’t be overstated--if you look through some of the links above, you will see tons of code from MI modules reused and extended all over the place.

Tom Whitwell’s blog post from 2016 covers getting set up to write code for Clouds. The biggest challenge seems to be finding the right setup for connecting modules to your computer if you don’t want to constantly load firmware via squawky modem WAV file.

Total cost: $200-$400 for module and USB connection stuff--but if you’re reading this far your probably have a module you could use
Pros: Modules widely available in lots of flavors, lots of powerful DSP code to modify
Cons: Getting set up a little more complicated than other options, no screens

TipTop Z-DSP: Pricey DSP module that loads algos via proprietary cards. If you find this thing in stock you can burn your own algos to blank cards--but the whole package will set you back ~$700.
Xaoc Devices Timiszoara: Forthcoming (possibly vaporware!) open DSP module that uses the same chip as the Z-DSP (the Spin FV-1) but just regular SD cards that allow you to load anything you want. This was announced in early 2019 but there’s still no word on it. This looks like a dream for homebrew DSP.
Orthogonal Devices ER-301: Looks insanely powerful but with a hefty pricetag and limited production so far. 🙈
Winterbloom Sol: Forthcoming USB MIDI to CV module from Thea Flowers. The module’s code is written in CircuitPython (everything else here is c++) and designed for customization. Preorders look to be starting in a couple months, this is definitely an interesting one.
VCV Rack: I haven’t played with VCV much but writing plugins seems like a great way to experiment for $0.
Korg NTS-1: Ok this is definitely not a Eurorack module but it is a small $100 synth with an effects engine. It uses the logue SDK so you can write/use custom oscillators and effects that can also be used on full-fledged hardware.

What’s up with the community?

It’s a little disappointing to see the lifecycles of these modules that are designed explicitly for hacking: they get some support, launch with some buzz, and then...not much else happens. I guess it makes sense--we think of the Eurorack community as growing wildly but it’s still pretty niche. And what portion of that community wants to write complicated code when they could be making fart sounds with their modular?

So what am I doing?

Well right now I found a nice deal on a Euroshield/Teensy, so I’ve got that in my rack as we speak (that’s my photo at the top!). I have a few ideas for software that I want to try to implement. If it’s not a total disaster I’ll share some code here.

How are you going with eurosheield?

Also you didn't mention 'electrosmith daisy seed' it's decent and $30 if you just buy the Seed, I got mine in the daisy Pod a few weeks ago and am trying to build something for my rack.

The sketches it came with were nice and it has an active community.
Check it out

joey / March 24, 2021 12:08 PM
Thanks Matt! Honestly I didn't get too far with the euroshield. I did fool around with some CircuitPython on the Winterbloom Big Honkin' Button and that seems like a really cool option for someone like me with a scripting language background. But really most of my pandemic creative mental energy has gone to Wavparty!

I think when I wrote this the Daisy wasn't out yet but it looks like a great option now, it's even powering a lot of the cool new DSP eurorack modules.